Psychologist Carl Jung introduced the word “synchronicity”,  coining it to describe a “meaningful coincidence,” when unrelated events seem to happen for a reason.  Synchronicity is something you feel. When, for no outward reason, the stars align and the right people come together at the right time and the result is something meaningful and long lasting.

Synchronicity is what occurred with the cast of the 2012 Fountain Theatre LA premiere of Tarell Alvin McCraney‘s In the Red and Brown Water.  Magic happened not only on stage. Friendships were formed seven years ago that remain strong to this day. And three actresses from that cast — Simone Missick, Maya Lynne Robinson and Diarra Kilpatrick — are now enjoying a blossoming of their TV careers at the same time. Coincidence? We don’t think so.

Diarra Kilpatrick is the creator and star of American Koko, an ABC digital original series, earning her an Emmy nomination for Outstanding Actress in a Comedy/Drama Series, Short Form. She created, wrote, and starred in the comedy pilot The Climb for Amazon, and is set to star in a new comedy for Showtime opposite Keenen Ivory Wayans.

Maya Lynne Robinson, recently on stage at the Fountain in Runaway Home, is now a series regular on ABC’s Roseanne spinoff  The Connors, playing the role of Geena Williams-Conner.

We asked these three dynamic actresses to share their thoughts on In the Red and Brown Water, and how theatre can form bonds that last a lifetime. 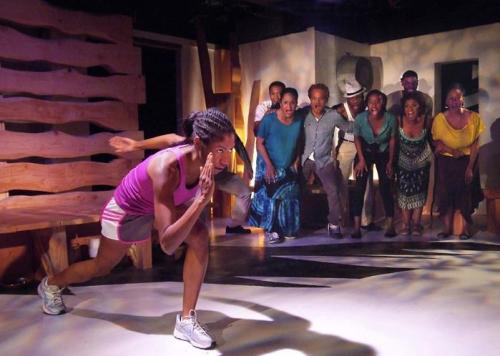 In the Red and Brown Water, Fountain Theatre, 2012.

What was it about In The Red and Brown Water that created such close ties?

MLR: For me, it stemmed from the fact that I was 3 months new in town and didn’t have a foundation/tribe yet. In the Red and Brown Water was the first project I was cast in once I moved to LA. I met these wonderfully creative and down-to-earth people and when you find those type of people, you shouldn’t let them go.

SM: I think what started at the table, with our director, Shirley Jo Finney, had a huge impact in creating a family amongst the cast and crew. To be able to discuss the play, the characters, inside and out and know that you were working with artists who took the work as seriously as you, made us all feel like we were experiencing something different and special. We knew we could trust one another onstage, and that trust helped us to build bonds as artists and as friends. But there is also a level of divine placement when it came to that production. Each of us were appointed to be there for those six plus months, for only God knows the reason, and to then be a part of each others lives. We’ve been there for each other through marriages, babies, cross country moves, and amazing work opportunities.  It is just one of those special blessings, that so many of us gelled, and we found sisters and brothers, aunties and cousins in one another.

DK: I do believe [director] Shirley Jo Finney brought together a great group of not only artists but people. It was a joy playing with them and I’m grateful that we’ve s formed such loving, supportive bonds. We made a family and even though that’s common in the theater, this is a particularly special group of artists.   Every one of us has continued to grow as artists and as people, I mean to the person. And I’m so, so proud of us.

What’s your favorite memory from that production?

MLR: Singing warm ups and prayer together before the show.  There was something about our vibration that made me happy to do the show with these people every day for almost six months.

SM: There are sooooo many. Some of them stay in the vault. But one of them is Maya Lynne stomping her feet to get some of our other (not as rhythmically gifted brothers) on beat. She earned a nickname from that.

With whom from the cast have you most stayed in touch?

SM: All of us are on a text message chain that we connect through. This past Valentine’s Day, we all sent silly pictures to say we loved each other.  I had the fortune to work with Shirley Jo four more times after that production, and she is such a special influence in my career and in my life. Our stage manager, Shawna and I have worked together again. I love that girl. Diarra and Maya Lynne are people that I talk to more often. We are all around the same age, experiencing some of the same career “firsts”, and we are always shooting each other a text of congratulations and cheering one another on. But the Red Brown family got together for a Christmas brunch, and FaceTimed with Stephen Marshall who moved to NY, so he wouldn’t be left out. We just love each other!

MLR: Whether we speak daily or once a year, we all pick up right where we left off. We have text message chains during holidays and big events. We try to have a reunion whenever possible. Half of us got together for a reunion earlier this year.

What is it about theatre — and the Fountain Theatre in particular — that creates a feeling of family?

SM: Live theatre is an experience like no other. It is the artist’s equivalent to trapeze work, but the net is your fellow cast members. You are sailing through the air, with the audience there witnessing you doing emotional gymnastics, and every moment is alive and terrifying and electrifying. The intimacy of the Fountain leaves no room for hiding. You have to be vulnerable and authentic at every turn. That experience is one that creates a bond with your acting partners, because you are all there being honest and alive together.

DK: In The Red and Brown Water was a beautiful experience. I remember being in church and was particularly prayerful about opening myself up to new opportunities and challenges and ways to express myself.  After service, Erinn Anova came up to me and said she was helping to cast a play at the Fountain and wanted to make sure she brought me in for it. She had seen me in something else and thought I’d be right for the lead. I so badly had wanted to work at The Fountain and with Shirley Jo. So, every step of the Red/Brown journey felt as synchronistic as that. Like it was meant to be. Like magic.

SM: I’ve managed to keep my Red Brown family close through it all. It truly was an experience of a lifetime that I will always cherish.